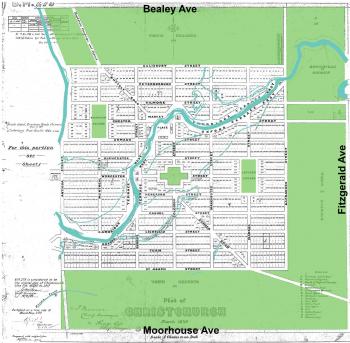 Central Christchurch should not be rebuilt to its former density, a landscape architect says.

Di Lucas said 19th-century surveying maps showed a network of waterways and wetlands under the central city that could not support a built-up central business district.

She cited an 1850s map that showed several tributaries either side of the Avon River.

"It [the map] has the streams on it for the central city, and it's quite a precise layout. It's quite detailed," Lucas said.

When transposed on to the present-day central city, the waterways mirrored some of the areas of worst earthquake damage, she said.

A stream that crossed Manchester St, between Salisbury and Peterborough streets, cut a swath under buildings and the street itself.

"You could plot that line right through all the way," she said.

"There's some very good solid apartments, two or three storeys high, and one block of it has sunk a metre and another block is more or less as it used to be.

"That line continues through the next block and it goes from there and does a drop in Manchester St of a metre."

She said it was "madness" to have intensive building so close to the Avon River on streets such as Fitzgerald Ave.

"They're encroaching and nature has rebelled," Lucas said.

"I think we need to respect the natural systems better."

Lucas favoured "daylighting" the waterways, saying the city could benefit from their exposure.

Lucas supported the idea of a greenbelt on the banks of the Avon that connected Hagley Park to the coast, and a sparsely rebuilt central city not exceeding four storeys.

"The value of Christchurch is in a low-rise city," she said.

"High rises make it cold and draughty and horrible. Armagh St is horrible when the easterly blows.

"You don't need to see the sea from within the centre, you can sense it, and enjoy the micro-climate from low-rise environs."

Greening of roof space and more efficient use of rainwater were needed too, she said.