Rebuild up to tree-height: no more than four storeys, says a leading NZ landscape architect 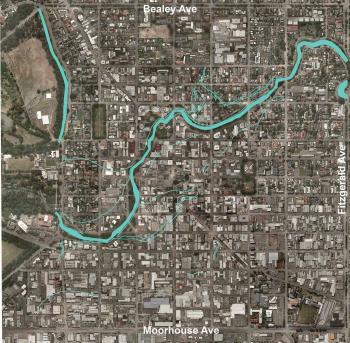 The rebuild of the Christchurch central business district (CBD) should be up to tree-height, seldom higher than four storeys, a leading New Zealand landscape architect Di Lucas said today.

Lucas said lower height limits enable more people-friendly city environments. She did an analysis for the Civic Trust 20 years ago and now is the time to reconsider this approach as Christchurch looks at re-building options, she said.

"The current City Plan lacks design controls and measures to make the CBD beautiful and sustainable. An urgent change is needed. We don’t want just utilitarian structures. We need a city with the X factor, to attract businesses, workers and visitors. Not again draughty spaces below high-rise and exposed to the easterly; buildings ignoring the solar resource; and, outmoded transport options. We could change it from a tired energy-hungry city to an appealing sustainable garden city.

"We need to reorganise spaces and access, with more green areas within a low rise city, using tree canopy – three or four storeys - as a measure. Noosa on the Sunshine Coast formalised their height limits to tree canopy height, and everyone loves that city. You don’t need to see the sea from within the centre, you can sense it, and enjoy the microclimate from a low rise environs.

"We went to the Environment Court for a local group eight years ago in a battle against Christchurch City Council and developers regarding building heights surrounding Victoria Square. The council had proposed an 80m height limit – over 20 stories. The court almost halved that and reduced heights to 15m along the Avon corridor. That fits the tree canopy measure.’’

Lucas said streams and wetlands in the CBD and the rest of the city were traditionally also a focus for iwi. Recognised archaeological sites are noted along the river corridors, including Victoria Square, the estuary and the coast.

She also said the city was poorer for the loss of special historic places for iwi, such as mahinga kai (food gathering areas). Many centuries ago, around the loop of the Avon (Otakaro) at Victoria Square, the settlement of Puari was home for many hundreds of Waitaha people. The lands and waters were “gardened” for food. Also, there were large Waitaha burial areas (urupa). The ancestor Tautahi was originally buried on the St Lukes site at the corner of Manchester and Kilmore Streets. More recognition of the various iwi values should be considered in the city rebuild.

“When I bought in Manchester Street 20 years ago kaumatua asked me to name my place after the ancestress Marokapara, as she had been a local advisor on plant use. I happily agreed.

Lucas has reviewed 1850s maps of Christchurch showing wetlands and streams through the city and was little surprised there was so much damage. Liquefaction had been predicted, and has occurred on areas with high water table and estuarine sands, and the existing and former natural levees along watercourses have exploded. These are a reminder that the underlying natural state of land needs to be carefully considered in renewed city layouts. The explosion of old levees (the natural stream banks made of silt), was evident across rural and urban Christchurch from both the September and March quakes.